February 2021. I went to the field for the first time. I doubted. I doubted if I would go. I was afraid of contracting COVID-19. I was afraid of infecting others with COVID-19. The nose swab test is not enough. I was also afraid of coming across as an unbalanced and doubting professional, unable to keep her decisions grounded. I stood there, suspended in the air, wrapped in doubts. Amidst pandemics, territories, people, stories and mosquitoes. 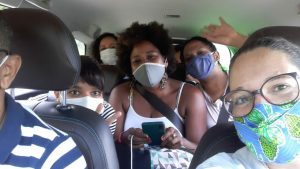 I went. Changed cars, waited, came back, forgot something, refuelled. Opened the window. The air circulates when we leave the place. I meet ECLIPSE colleagues for the very first time in person: Greice, Clarice, Felipe, Gisela, Natália and Seu Zé. Ah this three-dimensionality! I was observing each person with some surprise. Admiring their bodies and the timbre of their voices, free from online technological support. A leg rubbing against the car. Elbow to elbow. I revelled in this beauty. We were on the way, exchanging pleasantries and sharing stories. Books, music, eclipses and other astral phenomena.

Sweat under the mask in steamy Valença. My mouth and nose started to sweat. In agony I ran my tongue around my mouth. Wait, did I eat COVID? No, it was just a Subway sandwich. But let’s go. The local department of health.

When I began working as an audio-visual artist, did I ever imagine that I would be part of a multidisciplinary  project in health? That meeting was clear proof of a once-distant hypothesis. I was grateful to enter the governmental space, with its stereotypical furniture and common white walls. Leny, still in Salvador, appears on the screen of a phone and talked to Clarice. Raiça has COVID. Is she okay? What is shown and what is not shown in that square phone picture?

Meeting with Adriana, the Orobó Health Agent, Diro the Councillor and Livia from the primary care team. Layers of identity, pain and affection are woven in the convergence of a disease. Unanswered questions and the observation of lives and communities crossed by a tiny being. Frustrations. Coexistence. ‘Normality’ (normalidade). A complex and heterogeneous weaving that for some people also fits the word normalidade. The mapping of possible paths. The neighbours arrive at Adriana’s house to receive the CL injection but also to talk: ‘Do you accept a coffee (menorzinho)?’

In the late afternoon, a stew. In the backyard of the restaurant, a photo. A new old photo. I took a polaroid. In this grounding exercise, I imagined a photo in the palm of my hand. Not only in my hand, but in other hands. A tangible memory. De-digitalize memory. Pick it up, smell it, bite off a little piece… who knows? AND CLICK! Habemus equipe. 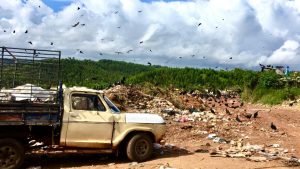 On the way to Orobó, there is dense forest and an earthy smell. The guarana trees watch us. That red eye. What plant is this? And this one? But the frenzy in the car as we deciphered the botany of the region fell silent. Tearing through the forest: the Orobó garbage dump. The one that appeared on Google. And now the dump introduced himself to us, with his whole body. Sadness. 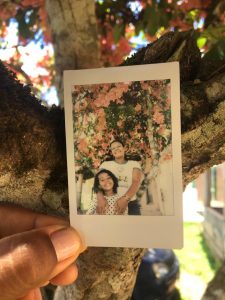 We finally arrived at the community centre, with its beautiful blue walls and dirt floor. A calm light came in through the window. ‘We have to commit to the pain of the other’ (A gente tem que se comprometer com a dor do outro). I believe that phrase came from a lady from the community, Dona Eunice, who is a health agent. I went for a coffee. I went through a door that gave access to an attached house still under construction. I could see the structure of this house, and at a certain angle, a hole in the wall gave another crack and another future  window, which in turn revealed a new hole. An infinite mirror effect made of bricks and concrete, in which I could see a concatenation of lights, escaping through the wall. The pain of the other. The hole in the wall. 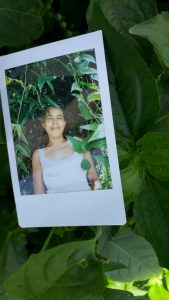 O desvio begins Felipe. The disease may be the common point, but it is in the deviation that one also builds. And the deviation is immense. In cinema, we also talk about ‘digression’. I think of the deviation eating the sweet banana, which they brought to share at the meeting.

In this community meeting, we also align ourselves to let the light pass. And slightly deviating, I stand in the shade of a tree and invite them to ‘try a photo’ (provarem uma foto). A small line is formed. After the polaroid picture is taken, it takes a few minutes for the image to appear. In the meantime we get to know each other a little more. Oh, I want it too! And me with my daughter here! Playing is the big news. Then Nega calls me to go to her house on the way to lunch. ‘I tell you, I am glad you came, it was about time’ (vou lhe dizer, que bom que vocês vieram, já tava na hora).

We say goodbye with chicken from the yard, stew, pirão, beans, juice and umbu that Dona Maria prepared. All this to digest, as well.